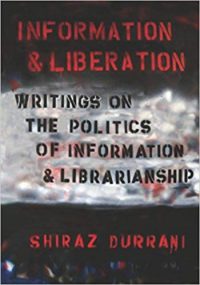 Social Justice
Out of Print

Writings on the Politics of Information and Librarianship

Price: Out of print

This title has been transferred to Vita Books.

Information and liberation is a retrospective collection of Shiraz Durrani’s articles and conference papers on the politics of information. The book documents the struggle for progressive and relevant information policies and practices over a period of 25 years in Kenya, Britain, and other countries. The book records also the vision, struggles and achievements of many progressive librarians and activists to develop a system and a society which can meet the information, social and cultural needs of all, particularly those marginalised by forces of capitalism and imperialism.

Durrani’s approach differs in that he seeks to link information liberation with active struggles for economic and social justice for all. A theme that runs throughout the book is that the struggle for information equality needs to be waged as part of a struggle against capitalist exploitation of human and natural resources. The theme is based on an assumption that “people have the right to the information they need.” The role of librarians and information activists is seen as one of providing relevant information to people as their basic human right. For this to happen, information workers and activists need to be empowered – or to empower themselves – to develop systems that meet the needs of their communities.

In addition to communicating a vision of a society where information is provided as a human right, the book records various innovative projects which put the progressive ideas into practice. It provides a rare record of a process of putting ideas and policies into practice, making available a useful resource for others involved in similar struggles, highlighting possible hurdles and showing the tools that can be used for success.

It is noteworthy that the book records this struggle in Kenya, a country of the South where many of the oppressive policies associated with corporate globalisation were first tried out before being used in Europe, USA and other parts of the world. The experience gained in addressing this stranglehold in Kenya thus has a greater, global significance. The focus of the book then shifts to England where a similar struggle is also recorded – perhaps indicating that the need for a more active and united struggle against capitalism and corporate globalisation is as urgent in the industrialised world as it is in Kenya.

While this “information” struggle is waged wherever there is oppression, few such struggles are recorded from the people’s point of view and with the firsthand experience and social commitment that Information and liberation seeks to provide.

Durrani graduated from the University of East Africa in 1968 and got his library qualifications from the University of Wales. He is a Fellow of the Chartered Institute of Library and Information Professionals (CILIP). He worked at the University of Nairobi Library from 1968 to 1984. Durrani was an active member of the then underground December Twelve Movement in the late 1970s and 1980s. Following the publication of his articles on the history of Kenyan anti-imperialist, liberation struggle in national press, Durrani left Kenya and moved to Britain in September 1984. In Britain he worked at Hackney and Merton public libraries before taking up the post of Senior Lecturer in Information Management in the Department of Applied Social Sciences at the London Metropolitan University.

Read the review in the SRRT Newsletter.