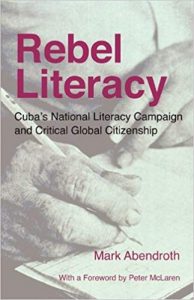 The author collected about 100 testimonies of participants in the Campaign, and many of their stories and perspectives are highlighted in one of the chapters. Theirs are the stories of perhaps the world’s greatest educational accomplishment of the 20th Century, and critical educators of the 21st Century must not overlook the arduous and fruitful work that ordinary Cubans, many in their youth, contributed toward a nationalism and internationalism of emancipation.